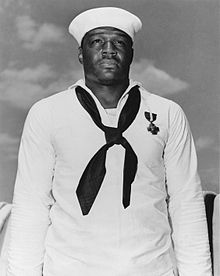 Dedicated to WWII hero Doris Miller, of Waco, TX. During the attack in the Pearl Harbor, Doris was asked to assist the captain, who was mortally wounded, to move him to a safer place. After helping the captain, he went back to the battle row and found a gun that was unmanned and went manage it. When asked to abandon ship, Doris was one of the men who were able to save some of the injured men. Because of his bravery, he was awarded the Navy Cross. “Doris was always considering other people rather than himself. He definitely put country first.”

He was also the Navy boxing champ at the time of the bombing of Pearl Harbor. He enlisted young into the only branch of the military which would take him. In addition to the Navy Cross, Doris was entitled to the Purple Heart Medal, the American Defense Service Medal, Fleet Clasp, the Asiatic-Pacific Campaign Medal and the World War II Victory Medal. “This marks the first time in this conflict that such high tribute has been made in the Pacific Fleet to a member of his race and I’m sure that the future will see others similarly honored for brave acts.” – Admiral Chester W. Nimitz

The owner of Train Waco, Jonathon Shelton, said, “The gym is always eager to honor our military veterans and first responders from the community.” Coach and event coordinator – and creator of the workout – Jared Gould said, “We hope the workout, which is free for the community to participate in, will increase awareness of the need for support of the memorial honoring the heroic acts by a Wacoan on December 7, 1941, during the attack on Pearl Harbor.”

The significance of the workout’s format and rep scheme:
– Partner workout be cause he moved/drug several men to safer location while the ship was being strafed – including the ships commanding officer who was mortaly wounded.
– 150m Partner Carry, 150 Wall Balls, because “15” is in reference to a quote from Dorie as having fired the 50cal deck gun (which he had no training on) for 15 minutes recording at least one enemy kill and possibly up to four
– AMRAP at the end because after moving men during strafing, and after firing the 50 cal at enemy planes for 15 mins, because of his size/athleticism his commanding officer ordered him to save “as many men as possible” from the water as his ship was sinking

TrainWaco hosted the inaugural “Dorie” workout on December 8, 2018 – as a part of the efforts of the Waco community to garner awareness and generate support the completion of a local Doris Miller Memorial. The community raised over $1.5 million dollars for the completion of a project. Doreen Ravenscroft from Cultural Arts of Waco noted, “CrossFit participants are known for pushing the limits of physical excellence just as Doris made the decision to go above and beyond as well. This is an opportunity to remember and honor Miller’s efforts in a meaningful way.”

When Partner 1 completes 15/10/5 round, partners switch. Continue, switching after each round until 100 cumulative Pull Ups are completed by the team. Score is numbers of Rounds and Reps of the 15/10/5 completed for both partners combined.